In the Arms of Your Rival: 5 Ways to Turn Customer Relationships Against You

Maybe the ex was possessive. Or made the other feel neglected. But sometimes it’s just about being the right match.

We kind of feel the same way with our brands. When we’re ready to move on and we get lucky, it’ll be peaceful and hassle free. Or…they become remisicent of that one crazy ex!

Let’s remember to keep it classy and show your customers you care – regardless of the breakup. It doesn’t have to be ugly and they may even stick around longer.

As our infographic “Breaking Up is Hard to Do” from last year warns us: On average, a business loses about 20% of its customers just by failing to tend to customer relationships and it can go up to 80%.

So where does Cupid miss with his arrows?

1) Hiding the way out for the customer (unsubscribing)

Did you hear about Jeannie’s break up? Figuring out how to leave was near impossible. The company was practically “hiding her car keys.” I know it’s a little painful when someone’s ready to leave, but you don’t have to be absurd about it and feel like this woman:

You could get funny, thoughtul or clever. According to Dj Waldrow, this is the best. unsubscribe. ever by Hubspot. Groupon’s old way of playing it still cracks me up to this day:

DailyLook shows they’re paying attention to me. They don’t want to be in my hair. So they did this:

Shouldn’t come as a shock I’m still with them for now.

Just let me return the darn thing and maybe I’ll shop from you again!

John Legere and T-Mobile KNOW the angst customers feel about the soaring bills. CEO Legere has had no problem expressing his opinon either. Despite his brash manners, customers feel like he’s here to remove the source of their frustration and stop wallets being drained. Check out a sassy Twitter battle between T-Mobile & AT&T where Legere steps in after a customer laments:

And they’re definitely breaking up with AT&T. Even T-Mobile is making it easy for them by covering up the “dumb” break-up fees and giving customers a break up template to send to their carriers. Have no mercy!

Becoming distruptive in your industry is actually easy…when you have your customer’s interests at heart. Legere and T-Mobile undoubtedly making competitors run amok. And that’s a gigantic beast of an industry often so hated. If you could do the same in your own, I doubt you’ll be getting many break up letters.

Asking customers to prove their disability, turning away them because of a service dog or even a stereotypical sign, gives your customers a solid reason to leave you. Even worse, others will see and join the cause. With large corporations, though, I try to be sensitive to the fact not every single employee or franchise behaves this way, but it warrants some attention.

Especially in the case of Starbucks.

Two of their stores in Manhattan were reported to treat Deaf patrons with a dismissive attitude and shoddy customer service. It resulted in a lawsuit. More recently, a man with a service dog was turned away from a Houston franchise because he needed to “prove” his disability.

We can’t have tolerance for this! Improving accessibility and employee sensitive training will earn you customers…but more importantly, their loyalty, ambassadorship and happiness.

Uber, a black car service app has customers leaving because of price surges supported by suspicious reasoning. It just doesn’t seem geninue. The New York Times recently wrote a piece “Customers Out in the Cold Balk at Uber Pricing” and I think this tweet perfectly wraps up what everybody feels.

Not all hope is lost, my friends. There are ways to win them back and even spark growth. Also remember our infographic for more stats and tips for keeping the lovebirds happy!

Got your own ugly break up story to share with us? 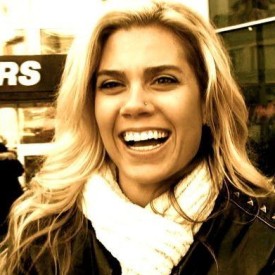